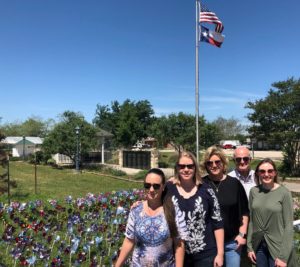 Jewell P Davenport became a licensed Agent in 1986.   She graduated from Texas Lutheran University with Bachelor’s degree of Business Administration with an accounting concentration. In 2004 Jewell became a Partner of the Agency, and opened the KDJ Schertz office. KDJ Insurance Agency was established in 1981 and has strong roots in its community. Jewell is a founding board member of the Schertz Chamber of Commerce where she served as Vice Chair and Chair.   She currently volunteers on the advisory council, EPIC mentor board and on the Biz Bud committee of the Chamber. She is also very involved in the Schertz Area Senior Center and Guadalupe County Children’s Advocacy Center.  In her spare time, Jewell enjoys gardening, working out and spending time with her Husband, Friends and Family.

David graduated from Texas Lutheran College in 1971 and settled in Marion with his family in 1974. He spent several years in the Life Insurance industry before opening his own business, KDJ Insurance Agency, in Marion in 1981. David was elected to the Board of Directors of Hochheim Prairie Farm Mutual Insurance Company of Texas in 1997, and just the following year was elected Mayor of the newly formed city of Santa Clara, Texas. In 2002 the Hochheim Prairie Board of Directors named him Chairman of the Board. David is a past Director of the Texas Association of Mutual Insurance Companies and an active member of the Marion Economic Development District and the Marion Education Foundation.

Hanna has been enjoying working with KDJ clients since March 2019 after moving here from Oklahoma. She is excited to continue learning and getting to know more of the clients. She is an Ambassador for The Chamber (Cibolo-Schertz-Selma). Hanna is working towards getting her insurance license to better serve. Her favorite things to do is fixing up her and her boyfriend’s new home and land which also includes hanging out with the dogs, chickens, ducks, bees and hoping that her vegetables and flowers will grow!

Christi jumped on the KDJ Team in 2016 and has loved every minute since then. She loves getting to know our clients and helping them protect their assets. When you see Christi, you will see a smile on her face and a cup of coffee in her hand. Her favorite pass time is hanging out with her kids and family.

Festus joined the KDJ Team in March 2018.  As the newest member of the KDJ Team Festus is excited to meet all the KDJ clients.  He is available for public appearances and barking engagements upon request.

Jeep joined the KDJ Team in March 2018.  She will be heading up the welcome committee.  Jeep is available for lunch dates upon request.

* Offices in Marion and Schertz